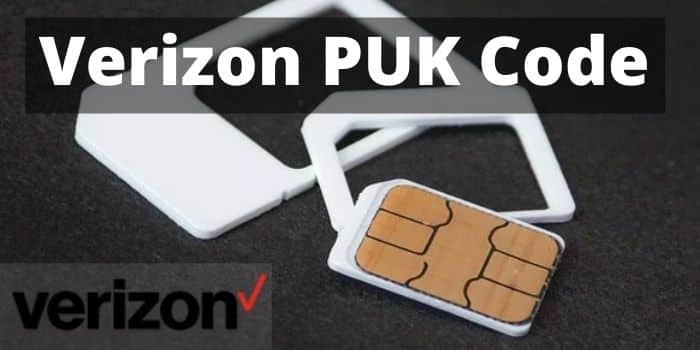 If you are a Verizon SIM Phone user and unintentionally have blocked your SIM card then, you may require a Verizon PUK code to unlock it. So, today in this post, we are going to discuss all the PUK code for Verizon, Why needs it, and where to get it?

Verizon Wireless was a distinct division of Verizon Communications that operated as a wireless network operator in the United States.

What Is Verizon PUK Code?

Verizon PUK code is an 8-digit number that can be used to unlock any Verizon sim card with so ease.

If your Verizon SIM has been blocked by entering the wrong PIN more than 3 times, Then you are required to use the PUK code to unlock Verizon SIM card.

Where Can I Find My Verizon SIM PUK Code?

When you bought your SIM card, you were issued a PUK code, which is an 8-digit number. On the backside of the SIM card, the PUK code is printed. You can check it out from there. If you can’t able to find the code on SIM then just contact customer care to solve this problem instantly.

To know Verizon customer care number, refer to the FAQ section below.

How do I get my Verizon PUK Code?

Here is the basic step which helps you to get the Verizon PUK code quickly. Follow the below mentioned steps.

What is the unlock code for Verizon SIM card?

PUK is an abbreviation of PIN Unblocking Key. The PUK Code is used to unblock a SIM card that has been blocked. If users enter the wrong PIN in the SIM, it generally gets blocked.

That’s all you have to do, Now you have successfully unlocked your normal phone.

If your Apple iPhone SIM PIN is blocked, follow the procedures below.

This will perfectly work on iPhone 5 & iPhone 6 but not on iPhone 4.

A pop-up message will appear on your screen that unblock SIM PIN succeed.

Note: The SIM card is permanently disabled if an invalid PUK is entered too many times.

What is the Verizon customer care number to get PUK code?

Dial 800-922-0204 for an instant solution. At first, the representative will verify that the SIM card belongs to you, and after successful verification, They will send you a message containing Verizon PUK code.

I Hope, after this whole post, You are able to unlock your Verizon SIM by using Verizon 8 digit PUK code.

Don’t forget these points, If you enter the wrong Verizon PUK code in your smartphone, Then your SIM will be get locked, So be careful while entering the PUK code for Verizon.

You may also know more about Verizon Telecom operator by reading more:

What services does Verizon offer?